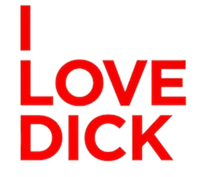 I Love Dick is an American television series released on Amazon Video. It is based on the novel of the same name by Chris Kraus. It was created by Joey Soloway and Sarah Gubbins. The pilot premiered on August 19, 2016, and the first season was released on May 12, 2017. On January 17, 2018, the series was canceled after one season.

Chris (Kathryn Hahn) is an unsuccessful New York City-based artist and filmmaker who accompanies her husband Sylvère (Griffin Dunne) to Marfa, Texas where Sylvère is taking up a research fellowship. Upon arrival in Marfa, Chris quickly becomes infatuated with Sylvère's fellowship sponsor Dick (Kevin Bacon). Her infatuation with Dick becomes articulated in un-delivered letters to him which are filled with unbounded sexually explicit desires. Her contentious and frustrating interactions with Dick as well as the writing of her confessional letters to him begin to affect her attitudes towards her marriage, work and confidence as an artist and person.