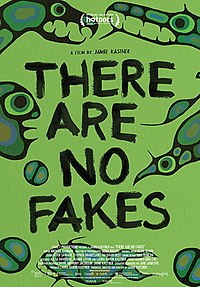 There Are No Fakes is a Canadian documentary film, directed by Jamie Kastner and released in 2019. Starting with musician Kevin Hearn's lawsuit against the Maslak McLeod Gallery after being informed that a Norval Morrisseau painting he had purchased appeared to be a forgery, the film expands into an exposé of a significant art fraud ring that has produced many fake Morrisseau paintings through the use of forced child labour in sweatshops, in which some of Morrisseau's own surviving family members are complicit; by some estimates, there may be up to 10 times as much fake Morrisseau art on the market as real work.