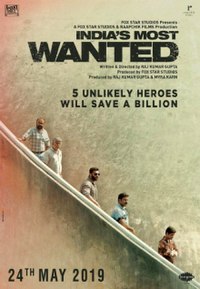 India's Most Wanted is a 2019 Indian Hindi-language action thriller film directed by Raj Kumar Gupta, and starring Arjun Kapoor. The film is about tracking a terrorist in a secret mission and arresting him without firing bullets. India's Most Wanted is inspired by the arrest of proscribed organisation Indian Mujahideen (IM) terrorist Yasin Bhatkal, also referred to as India's Osama Bin Laden, near the India-Nepal border in August 2013.