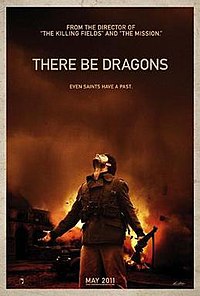 There Be Dragons is a 2011 historical epic war drama film written and directed by Roland Joffé. Set during the Spanish Civil War of the 1930s, its features themes such as betrayal, love and hatred, forgiveness, friendship, and finding meaning in everyday life. The film was released on 6 May 2011. It includes the story of soldiers, a journalist, his father, and a real-life priest, Josemaría Escrivá, the founder of Opus Dei, who was canonized as a Roman Catholic saint.

Arising out of the horror of the Spanish Civil War, a candidate for canonization is investigated by a journalist who discovers his own estranged father had a deep, dark and devastating connection to the saint's life.