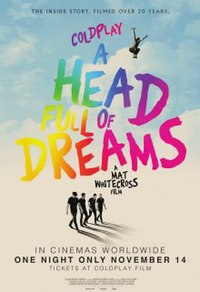 Coldplay: A Head Full of Dreams is a music documentary directed by Mat Whitecross about British band Coldplay, documenting their beginnings and rise to fame. The film received a single-day release on 14 November 2018 in select cinemas globally and was available to stream on Amazon Video two days later. It was met with lukewarm reviews.