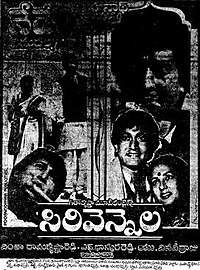 Sirivennela (English: The Moonlight) is a 1986 Indian Telugu-language romance film, written and directed by K. Viswanath. The film won Nandi Awards for Best lyrics, Best Male Playback Singer, Best Cinematography and Best Supporting Actress. The film was screened at the Asia Pacific Film Festival, the International Film Festival of India, the Moscow Film Festival and the AISFM Film Festival. The film was shot in Jaipur and Kerala. The film had Hariprasad Chaurasia's flute rendering and a cameo of drummer Sivamani. The film was dubbed in Tamil as Raaga Devathai.

Hari Prasad (Sarvadaman Banerjee), a blind flutist lives along with his younger sister in a village near Jaipur, which was also a tourist attraction. Though he lacks knowledge of classical music, he plays flute beautifully and makes a living by playing it to tourists. One day, guide Jyothirmai (Moon Moon Sen) comes there along with a bunch of tourists and listens to his flute. She understands his talent and helps him understand nature and to become a famous flutist. Years pass and Hari Prasad becomes Pandit Hari Prasad. Unknown to her, Hari Prasad admires her very much and dedicates all his albums to her. Meanwhile, a mute painter Subhashini (Suhasini) who meets him in his village, falls for him.