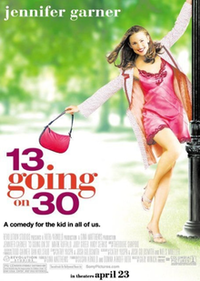 13 Going on 30 (released as Suddenly 30 in some countries) is a 2004 American fantasy romantic comedy film written by Josh Goldsmith and Cathy Yuspa, directed by Gary Winick, and starring Jennifer Garner. It follows a 13-year-old girl who dreams of being popular. During her birthday party, she is humiliated by her classmates and wishes that she was 30 years old. When she eventually does emerge, she finds herself suddenly 30 years old and in 2004, uncertain how she got there.

In 1987, young and geeky Jenna Rink yearns to be popular, but can only persuade the "Six Chicks" – the ruling clique led by Lucy "Tom-Tom" Wyman – to attend her 13th-birthday party by doing their homework. Jenna's best friend, Matt "Matty" Flamhaff, brings her a pink dollhouse he made himself, and a packet of "magic wishing dust" he sprinkles on the dollhouse roof.