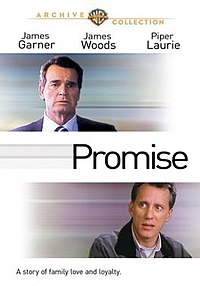 Promise is a 1986 American made-for-television drama film presented by Hallmark Hall of Fame. Adapted by screenwriter Richard Friedenberg from a story by Ken Blackwell and Tennyson Flowers, the film was directed by Glenn Jordan and aired on December 14, 1986. James Garner stars as a care-free man who returns to his hometown after his mother's death, and has to assume responsibility for his mentally ill younger brother (James Woods). One of the most honored films in television history, Promise received the Peabody Award, Humanitas Prize, Christopher Award, and Golden Globe Award. Its record of five Primetime Emmy Awards was not matched until 2010, by the film Temple Grandin.

When his mother dies, estranged son Bob (James Garner) inherits her estate, and, surprisingly, custody of his younger brother D.J. (James Woods), who suffers from schizophrenia. Bob is initially reluctant at his new responsibility, but remembers that he had promised his mother to look after his brother.