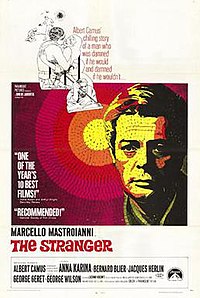 The Stranger is a 1967 film by Italian film director Luchino Visconti, based on Albert Camus's 1942 novel The Stranger, with Marcello Mastroianni.

Mersault's friend Raymond beats his girlfriend and is sued by her. In court, Mersault testifies to his friend's advantage. Raymond is off the hook, but now his girlfriend's male relatives stalk Mersault. He shoots one of them and ends up in prison.