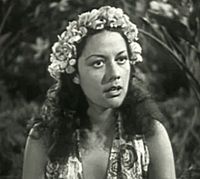 Paradise Isle is a 1937 American film directed by Arthur Greville Collins with sequences shot in American Samoa. The film was produced by Dorothy Davenport under the name "Dorothy Reid" and was released by Monogram Pictures. The film stars Mexican actress Movita Castaneda continuing her persona of a South Seas Island girl that began with Mutiny on the Bounty (1935).

Kennedy is a shipwrecked blind artist who is washed ashore on an island en route to meeting an eminent eye surgeon in Suva who is the only chance to restore his sight. He is nursed back to health by Ida, an island girl. When Kennedy is distraught that he cannot pay for the operation due to his money being lost when his ship went down, Ida obtains a valuable black pearl that sets scheming in motion on the island paradise.