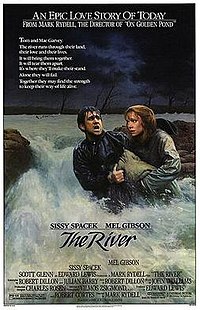 The River is a 1984 American drama film directed by Mark Rydell, written by Robert Dillon and Julian Barry, and stars Sissy Spacek, Mel Gibson, and Scott Glenn. The film tells the story of a struggling farm family in the Tennessee valley trying to keep its farm from going under in the face of bank foreclosures and floods. The father faces the dilemma of having to work as a strikebreaker in a steel mill to keep his family farm from foreclosure. It was based on the true story of farmers who unknowingly took jobs as strikebreakers at a steel mill after their crops had been destroyed by rain.

Tom and Mae Garvey are a hard-working couple living with their two children on the east Tennessee farm owned by Tom's family for generations. They and many of their neighbors have hit hard times as of late. A downturn in the economy has led to dwindling land prices. But their biggest problem has been that their crop land has been prone to flooding as the property is adjacent to a river. Manipulating the powers that be include local senator Neiswinder and the local bank. Joe Wade, who also grew up in the area and nows runs the local milling company that sets the local grain prices, is working behind the scenes to buy up the properties along the river for a song as he wants to build a dam that would flood the Garvey's and other riverfront properties. The dam would generate electricity but more importantly for Joe, it would provide irrigation opportunities for farm properties away from the river, such as his own. Tom already intensely dislikes Joe because he and Mae used to be a couple. Joe's manoeuvrings coupled with the continuation of these and many other farming problems makes it increasingly difficult for Tom and Mae to hold on to their farm, as Tom is determined at any cost to have it stay on the land of his ancestors.