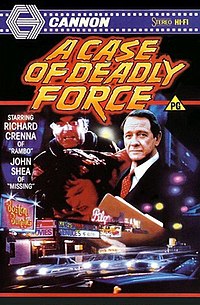 A Case of Deadly Force is an American made-for-TV drama film that was released on April 9, 1986. The movie was shot in Boston, Massachusetts, United States, starring Richard Crenna, John Shea and Dylan Baker. It was adapted from the book Deadly Force by Lawrence O'Donnell.

Fact-based story about a 1975 cover-up of an unjustified shooting of a black man by two white members of the Boston Tactical Unit. While on stakeout on a suspected getaway car used in an armed robbery, the two gunned down a black man who entered the car. The two claimed the man had a gun and they shot in self-defense. Police investigation decided it was a rightful shooting. The man's widow (Lorraine Toussaint) knew her husband would not be carrying a weapon and became determined to prove her husband's innocence. She hired a former cop (Richard Crenna), who had become a lawyer, to prove her case. Working with his four sons (John Shea, Tate Donovan, Tom Isbell, & Dylan Baker), the lawyer team takes on the police force in what eventually proved to be a landmark legal decision.