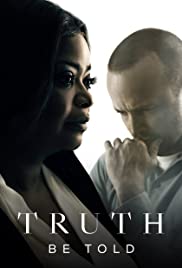 Truth Be Told is an American drama streaming television series based on the novel Are You Sleeping by Kathleen Barber and produced for Apple TV+. The series was created by Nichelle Tramble Spellman, who is also set to executive produce and write for the show. The series premiered on December 6, 2019. The soundtrack, composed by John Paesano, was released by Lakeshore Records on the same day. New York's Paley Center also aired episodes of the show. A featurette from the series was released on November 26, 2019. On March 5, 2020, Apple renewed the series for a second season.

True crime podcaster Poppy Parnell is called to investigate the case of convicted killer Warren Cave, a man she painted as the murderer of the father of identical twins. Soon, Parnell must decide where the lines between guilt and innocence lie when Cave claims that he was framed for the crime.