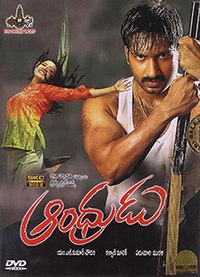 Andhrudu is a 2005 Indian Telugu-language romantic action film produced by ML Kumar Chowdary on Sri Keerthi Creations banner and directed by Paruchuri Murali. Starring Gopichand, Gowri Pandit in the lead roles and music composed by Kalyani Malik. The film was critically acclaimed for its action sequences and was a blockbuster at the box office. The film was also dubbed into Tamil as Ivanthanda Police and into Hindi as Loha: The Ironman.The film was remade in Bengali Bangladesh as Prem Mane Na Badha with Shakib Khan and Apu Biswas.

Surendra (Gopichand) is an honest and hot-blooded cop. Archana (Gowri Pandit) is the daughter of a police commissioner. They meet accidentally, and their relationship blossoms into love. Archana's father is of Bihar origin. Parents settle the match of Surendra and Archana. When they are about to get engaged, Surendra expresses his reservations due to Archana overhearing her father's conversation with his long-estranged sister on the subject of Archana and her cousin Sinha (Salim Baig) marrying. Surendra takes the blame for the destroyed relationship, and Archana goes to Bihar to wed Sinha. The rest of the story is all about how Surendra goes to Bihar and wins Archana back.