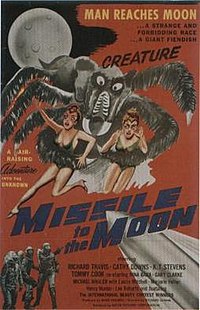 Missile to the Moon is a 1958 independently made American black-and-white science fiction film drama, produced by Marc Frederic, directed by Richard E. Cunha, that stars Richard Travis, Cathy Downs, and K. T. Stevens. The film was distributed by Astor Pictures and is a remake of an earlier Astor Pictures-distributed film, Cat-Women of the Moon (1953). Missile to the Moon was released in late 1958 as a double feature with Cunha's Frankenstein's Daughter.

Two escaped convicts, Gary (Tommy Cook) and Lon (Gary Clarke), are discovered hiding aboard a rocket by scientist Dirk Green (Michael Whalen), who then forces them to pilot the spaceship to the Moon. Dirk, who is secretly a Moon man, wants to return home.