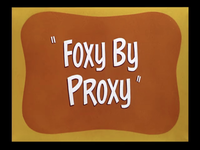 Foxy by Proxy is a 1952 Merrie Melodies cartoon directed by Friz Freleng. The short was released on February 23, 1952, and features Bugs Bunny. Mel Blanc voices Bugs Bunny and one of the dogs that talks in the short, while an uncredited Stan Freberg voices the large hound. This cartoon is considered a remake to Of Fox and Hounds from 1940; in fact, the opening sequence was "borrowed" directly from the original.

A number of smaller hounds come out of a giant dog house, followed by a large fox hound (voiced by Freberg) who is excited by the prospect of the hunt, especially the moment where the fox's tail is to be cut off. The hunters and dogs then pass over Bugs' hole, waking him, with the large fox hound lagging behind. Once Bugs directs the larger fox hound to where the others went, Bugs dons a fox costume and begins to play tricks with the large fox hound, leaving Bugs amazed at the dog's inability to recognise a fox. Once the large hound realizes the difference, he runs back to the tree where Bugs is now undressed. The bunny giggles at the dog's intelligence, saying that "I've seen better heads on a glass of root beer!" At this point, Bugs (with his fox costume back on) stamps fox tracks to mislead this hound, which lead to train tracks, which the dog continues to follow. Once the dog reaches Bugs and tries to get him, Bugs questions what kind of tracks the dog was following, which ends up putting the dog on the front of a locomotive, while the dog exclaims that he caught a train.