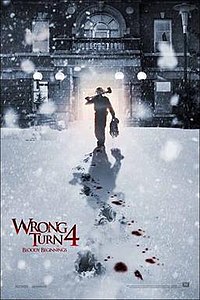 Wrong Turn 4: Bloody Beginnings is a 2011 American slasher film written, directed by Declan O'Brien and stars Jenny Pudavick, Tenika Davis, Kaitlyn Wong and Terra Vnesa. It is the fourth installment of the Wrong Turn franchise and served as a prequel to the 2003 film Wrong Turn.

In 1974, at the Glenville Sanatorium in West Virginia, Three Finger, Saw Tooth, and One Eye; known as the Hillicker Brothers, escape from their cells and release the other patients. Together, they brutally massacre the orderlies and doctors.