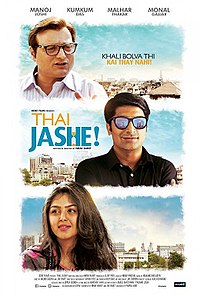 Thai Jashe! is a 2016 Indian Gujarati film written and directed by Nirav Barot. It is about the struggles of a middle class man to achieve his goals in the metrocity Ahmedabad. The film stars Manoj Joshi, Malhar Thakar, and Monal Gajjar. The film was released on 3 June 2016.

Pranav Joshi (Malhar Thakar) works as an industrial designer in Ahmedabad. When his father's dyeing factory in Jetpur goes bankrupt, his parents are forced to move with him in Ahmedabad. When they are insulted by his land lady, Pranav decides he has had enough and decides to buy his own house in the city.