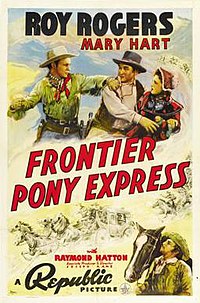 At the start of the American Civil War in 1861 the Pony Express is of vital importance. An Confederate States of America secret agent Brett Langhorne is working undercover by purchasing a St. Joseph, Missouri newspaper. Accompanied by his sister they meet Roy Rogers who rescues her from a runaway stagecoach. Brett unsuccessfully tries to get Roy to work for money to help the Confederacy.