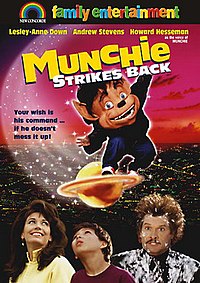 Munchie Strikes Back is a 1994 American comedy feature film directed by Jim Wynorski and written by Wynorski and R. J. Robertson, as a sequel to Munchie. While Dom DeLuise provided the voice of Munchie in the first movie, this time it was done by Howard Hesseman.