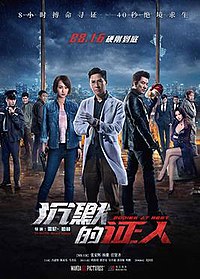 Bodies at Rest is a 2019 action thriller film directed by Renny Harlin, starring Nick Cheung, Richie Jen, and Yang Zi. It is Harlin's third Chinese-language film, following Skiptrace (2016) and Legend of the Ancient Sword (2018). The film had its world premiere as the opening film of the 43rd Hong Kong International Film Festival on March 18, 2019. It was released in China on August 16, 2019.

A pathologist Chen Jia Hao and his assistant Lynn are working late at a public morgue on a Christmas Eve. Three masked men break into the morgue, trying to retrieve a bullet from a corpse.