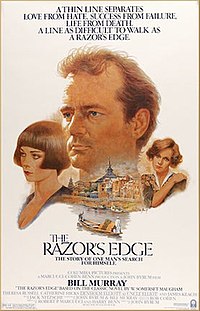 The Razor's Edge is a drama film starring Bill Murray. The film is an adaptation of W. Somerset Maugham's 1944 novel The Razor's Edge. Theresa Russell, Catherine Hicks, Denholm Elliott, Brian Doyle-Murray and James Keach also star in the film. John Byrum directed the film, which was co-written by Murray and Byrum.

In Illinois in 1917, just before the United States joins World War I, a fair has been planned to raise money to support Gray Maturin and Larry Darrell, who are joining the war in Europe as ambulance drivers. Larry looks forward to returning home to marry his longtime sweetheart Isabel. Larry shares a final night with Isabel watching the fireworks along with Gray, their close friend Sophie, and her husband Bob.