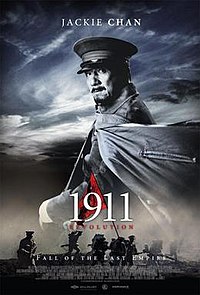 1911, also known as Xinhai Revolution and The 1911 Revolution, is a 2011 Chinese historical drama film. The film is a tribute to the 100th anniversary of the Xinhai Revolution. It is also Jackie Chan's 100th film in his career. As well as starring in it, Chan is also the executive producer and co-director of the film. Co-stars include Chan's son Jaycee Chan, Li Bingbing, Winston Chao, Joan Chen and Hu Ge. This film was selected to open the 24th Tokyo International Film Festival.

The story closely follows key events of the Xinhai Revolution, with focus on Huang Xing and Sun Yat-sen. It begins with the Wuchang Uprising of 1911 and follows through historical events such as the Second Guangzhou Uprising on 27 April 1911, the deaths of the 72 martyrs, the election of Sun Yat-sen as the provisional president of the new Provisional Republic of China, the abdication of the last Qing dynasty emperor Puyi on 12 February 1912, and Yuan Shikai becoming the new provisional president in Beijing on 10 March 1912.