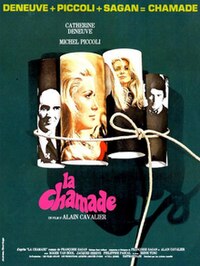 Based on the 1965 novel La Chamade by Françoise Sagan, the film is about a beautiful woman who is mistress to Charles, a rich, good-hearted businessman who provides for all her material needs, but for whom she has no true love. When she meets a charming young man her own age, Antoine, she falls in love. He finds her a menial job in a publishing firm, but she can not or will not hold it down. Soon she becomes pregnant with his child. But Charles helps her through her crisis by funding her abortion – against the wishes of Antoine, who nevertheless accepts, even though he planned on moving out of his bachelor flat, the three of them into a soulless concrete block, money being short. In the aftermath, her feelings for the younger Antoine fade. Eventually, she returns to the good-hearted businessman who has patiently waited for her.