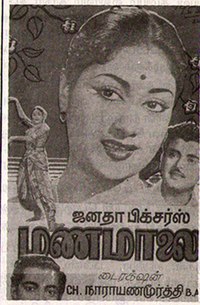 Manamalai (; ) is a 1958 Indian Tamil-language romantic drama film directed by Chitrapu Narayana Rao and written by Vindhan. It is based on the 1914 novel Parineeta by Sarat Chandra Chattopadhyay. The film stars Gemini Ganesan and Savitri. It was released on 14 February 1958, and failed commercially.

Shekhar and Lalitha are lovers, but their romance is interrupted by Kumar, a wealthy young man.