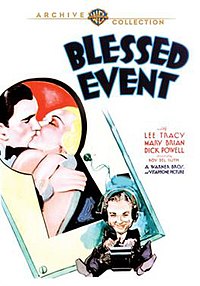 Blessed Event is a 1932 American pre-Code comedy-drama film directed by Roy Del Ruth and starring Lee Tracy as a newspaper gossip columnist who becomes entangled with a gangster. The Tracy character (Alvin Roberts) was reportedly patterned after Walter Winchell, famous gossip columnist of the era. The film was Dick Powell's film debut.

Alvin Roberts (Lee Tracy) feuds with Bunny Harmon (Dick Powell), a singer. Roberts reports on society people who are expecting a "blessed event", i.e. going to have a child. One such report antagonizes a gangster in a delicate situation, who sends over a henchman to threaten him. Roberts manages to turn the tables on the gangster.