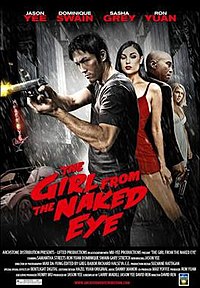 The Girl from the Naked Eye is a 2012 neo-noir martial arts film directed and written by David Ren. It stars Jason Yee, Samantha Streets, Ron Yuan, Dominique Swain, Sasha Grey and others.

Jake (Jason Yee) is a hired driver for a seedy escort service operating out of "The Naked Eye" Strip Club, and falls for a witty high-class escort named Sandy (Samantha Streets). However, one night Sandy is found dead, with the only clues remaining being records of cell phone calls made the night she was murdered. Jake sets out to avenge Sandy's death by risking everything and walking a bloody path to find her killer.