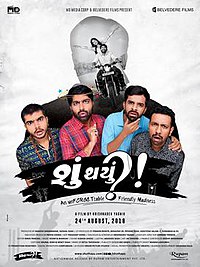 Shu Thayu? is a 2018 Indian Gujarati language comedy film written and directed by Krishnadev Yagnik and produced by Mahesh Danannavar, the founder of MD Media Corp & Vaishal Shah. It stars Malhar Thakar, Yash Soni, Mayur Chauhan, Mitra Gadhvi, Aarjav Trivedi and Kinjal Rajpriya. The score was composed by the Kedar-Bhargav and Rahul Munjariya. The film is a remake of the Tamil film Naduvula Konjam Pakkatha Kaanom (2012).

Manan (Malhar Thakar) falls in love with Deepali (Kinjal Rajpriya) and tries to convince her parents to let them marry. As wedding preparations begin, he is injured in a cricket match and loses his memory of the past two years. Included in those lost memories is his beloved Deepali. Only his friends know about the accident and wait anxiously to see if Manan will regain his memory before his wedding day or if his family, Deepali, and her family must be told what happened.