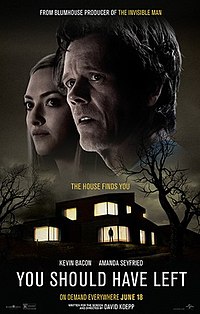 You Should Have Left is a 2020 American psychological horror film written and directed by David Koepp, based on the 2017 book of the same name by Daniel Kehlmann. It stars Kevin Bacon and Amanda Seyfried. Jason Blum served as a producer through his Blumhouse Productions banner.

Theo Conroy (Kevin Bacon) is a retired banker married to a younger woman Susanna (Amanda Seyfried), an actress, and they share a daughter named Ella. One afternoon when Theo attempts to visit Susanna on set, he is denied entry. While waiting to be granted authorization, he hears Susanna doing a love-making scene and is visibly annoyed. Susanna later apologies to Theo, attributing his obstruction to a misunderstanding, and she tells him she has "put him on the [approved] list". Theo informs Susanna that the set security guard recognised him; Susanna teases Theo, telling him that "they think you're dangerous."