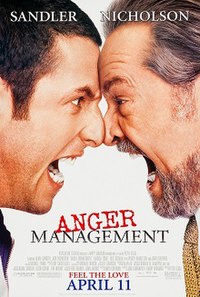 Anger Management is a 2003 American buddy comedy film directed by Peter Segal and written by David S. Dorfman. Starring Adam Sandler, Jack Nicholson, Marisa Tomei, Luis Guzmán, Woody Harrelson, and John Turturro, the film tells the story of a businessman who is wrongly sentenced to an anger management program where he meets an aggressive instructor. Anger Management was released in theaters in the United States on April 11, 2003, by Columbia Pictures and grossed $195.7 million against a $83.5 million budget.

In 1978 Brooklyn, as a young Dave Buznik is about to experience his first kiss with the girl of his dreams, local bully Arnie Shankman suddenly pulls down his pants and underwear, exposing Dave's penis and humiliating him in front of everybody.