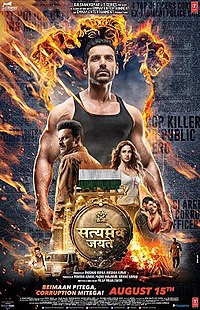 Satyameva Jayate is a 2018 Indian Hindi-language vigilante action film directed by Milap Milan Zaveri. It stars John Abraham and Manoj Bajpayee in lead roles, and also marks their second collaboration after Shootout at Wadala. The shooting for the film began on 5 March 2018.

Veer is a painter and a vigilante who kills corrupt cops by setting them on fire. Without his identity revealed, he wins public support for wiping out the corrupt, and also forms a close relationship with a vet named Shikha. Worried by the rising body count and seeing other cops terrified, Commissioner Manish Shukla summons Shivansh, an honest officer to hunt down the killer. Using a voice altering application, Veer contacts Shivansh and threatens to kill a corrupt officer. Shivansh is tricked into believing the police station would be targeted, while Veer fights off and kills the targeted corrupt cop at a petrol pump. Realizing his mistake, Shivansh begins thinking and discovers the killing pattern to be as per the acronym "Satyameva Jayate," and the next target to be at a place beginning with the letter Y. Shivansh and his team locate the station and begin surveillance as they wait for the killer. Disguised as a cop, Veer enters the police station and thrashes a corrupt cop torturing an innocent suspect. After he sets him on fire, Shivansh hears the screams and rushes to the station to find the cop burning. Veer manages to flee and later greets Shivansh at his home where they both are revealed to be brothers.