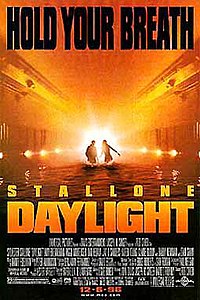 In upstate New York, a waste management firm loads barrels of toxic waste onto trucks, intending to illegally dispose of them at a site in New Jersey. They are shown heading into the Holland Tunnel along with several commuters, including struggling playwright Maddy Thompson (Amy Brenneman), a bus of juvenile offenders, a vacationing family, an elderly couple with a dog, and sporting goods retailer Roy Nord (Viggo Mortensen). Meanwhile, a gang of robbers grabs gems from a gem buyer after mugging him and takes his car to escape the NYPD by racing into the tunnel. The gang force their way through the north tube traffic, where the driver loses control, smashing though a security booth and into one of the trucks, causing it to detonate, and resulting in a sympathetic detonation of the remaining trucks. The tunnel entrances cave in, and a devastating fireball sweeps through the tunnel, incinerating the majority of the motorists within it.