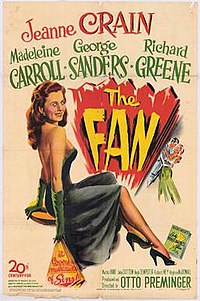 The Fan is a 1949 American drama film directed by Otto Preminger. The screenplay by Dorothy Parker, Walter Reisch, and Ross Evans is based on the 1892 play Lady Windermere's Fan by Oscar Wilde. The play had been filmed several times before, with a 1916 silent film, a later adaptation by Ernst Lubitsch in 1925 as well as versions in Spanish and Chinese.

The film opens in a post-World War II London auction house, where an elderly woman is trying to acquire an attractive fan she claims was once hers. A flashback to the Victorian era of Wilde's play reveals she is the scandalous Mrs. Erlynne, who in middle age becomes entangled with Lord Arthur Windermere, whose young and beautiful but socially conservative wife Margaret tends to judge others harshly. Lord Windermere financially supports Mrs. Erlynne, allowing her to live in the elegant manner to which she's accustomed, and the couple become the favorite subject of local gossips. When Margaret hears the stories, she mistakenly believes the two are involved in a clandestine affair and subsequently allows herself to succumb to the charms of Lord Robert Darlington, who has made no secret of his ongoing romantic interest in her. In order to ensure the younger woman does not make the same mistakes she has in the past, Mrs. Erlynne reveals a shocking secret: she is Lady Windermere's mother, who Margaret was told had died when the woman abandoned her husband and daughter for another man. In order to protect the girl's reputation, Mrs. Erlynne sacrifices her own happiness by placing herself in a compromising position that jeopardizes her pending marriage to Augustus Lorton.