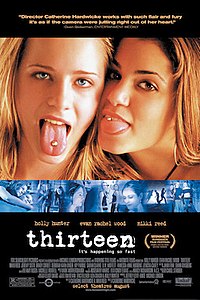 Thirteen is a 2003 American teen drama film directed by Catherine Hardwicke, written by Hardwicke and Nikki Reed, and starring Evan Rachel Wood, Holly Hunter, and Reed. Loosely based on Reed's life from ages 12 to 13, the film's plot follows Tracy, a junior high school student in Los Angeles who begins dabbling in substance abuse, sex, and crime after being befriended by a troubled classmate. It features Brady Corbet, Deborah Kara Unger, Kip Pardue, and Vanessa Hudgens in supporting roles.

13-year-old Tracy Freeland begins her school year as a smart and mild-mannered honors student at a middle school in Los Angeles. Her divorced mother Melanie is a recovering alcoholic, who struggles to support Tracy and her older brother Mason by working as a hairdresser. Tracy feels ignored by her mother, who is too busy with her fellow ex-addict boyfriend Brady to address Tracy's increasing depression. After being teased for her "Cabbage Patch" clothes, Tracy decides to shed her "little girl" image and gets her mother to purchase trendier clothes.