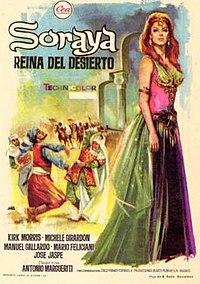 Devil of the Desert Against the Son of Hercules 1964

Devil of the Desert Against the Son of Hercules is a 1964 international co-production filmed in Algeria and directed by Antonio Margheriti.

An evil and ambitious usurper named Ganor seizes a kingdom by assassinating the Sultan and imprisoning his son Prince Daikor and daughter Princess Soraya to prevent revolt. Princess Soraya is defiant and escapes by leaping out the palace window into a river. She is discovered by a pair of peasants Anthar and the mute Aimu who become her protectors, and later rescuers and avengers against Ganor.