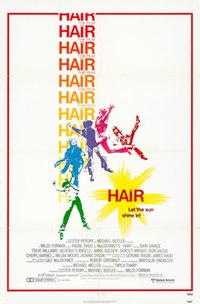 Hair is a 1979 American musical anti-war comedy-drama film based on the 1968 Broadway musical Hair: The American Tribal Love-Rock Musical. Set against the backdrop of the hippie counterculture of the Vietnam era, the film focuses on a Vietnam War draftee who meets and befriends a "tribe" of hippies while en route to the army induction center. The hippies and their leader introduce him to marijuana, LSD and their environment of unorthodox relationships and draft evasion.

Claude Hooper Bukowski of Oklahoma is sent off to New York City after being drafted into the Army ("Age Of Aquarius"). Before his draft board-appointment, Claude begins exploring New York, where he encounters a close-knit "tribe" of hippies led by George Berger. He observes the hippies panhandle from a trio of horseback riders including Short Hills, New Jersey debutante Sheila Franklin ("Sodomy") and later catches and mounts a runaway horse, which the hippies have rented, exhibiting his riding skills to Sheila ("Donna") before then returning the horse to Berger, who offers to show him around.