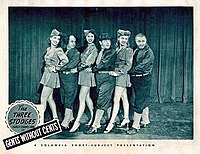 Gents Without Cents is a 1944 short subject directed by Jules White starring American slapstick comedy team The Three Stooges (Moe Howard, Larry Fine and Curly Howard). It is the 81st entry in the series released by Columbia Pictures starring the comedians, who released 190 shorts for the studio between 1934 and 1959.

The Stooges are small-time song-and-dance performers who are having trouble rehearsing due to loud tapping that is going on one story above them. When they go to give the rowdies a piece of their mind, three lovely ladies named Flo (Lindsay Bourquin), Mary (Laverne Thompson) and Shirley (Betty Phares) come to the door. It turns out the girls are performing their tap dance routine. The six become friends and go to a talent agent, Manny Weeks (John Tyrrell), to show off their stuff. However, he is at first unimpressed with the Stooges' act, but hires them anyway to perform at the Noazark Shipbuilding Company to entertain defense workers.