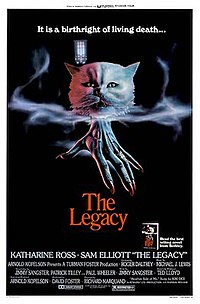 The Legacy is a 1978 horror film directed by Richard Marquand, in his directorial debut, and starring Katharine Ross, Sam Elliott, Roger Daltrey, John Standing, and Margaret Tyzack. It follows an American couple who are summoned to a British mansion while visiting England for a work obligation, where they stumble upon its family's curse.

Maggie Walsh and her boyfriend Pete Danner are interior decorators from Los Angeles. They are retained by an anonymous British client. Their reluctance to abandon their current client in California is alleviated when that client dies suddenly under mysterious circumstances. Taking advantage of their pre-paid airfare, they travel to England and are immediately involved in a traffic collision with a limousine. The passenger reveals himself as their mysterious benefactor, Jason Mountolive, who invites them to his rambling estate, Ravenhurst.