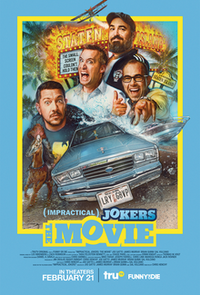 Impractical Jokers: The Movie is a 2020 American reality comedy film directed by Chris Henchy, based on the truTV television series Impractical Jokers. The film stars Brian Quinn, James Murray, Sal Vulcano, and Joe Gatto, also known as The Tenderloins. It was theatrically released on February 21, 2020.

In 1994 Staten Island, a group of four teenage friends, Joe, Sal, Murr and Q sneak into a Paula Abdul concert disguised as security personnel. However, they accidentally ruin the concert after Joe jumped out on stage and poorly acted as a hype man. The outcome embarrassed them and angered Abdul, who vows to get her revenge on the Jokers.