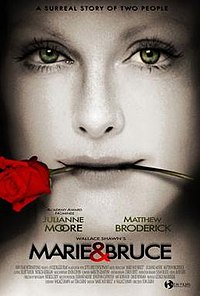 Marie and Bruce is a 2004 American comedy drama film directed by Tom Cairns and starring Julianne Moore and Matthew Broderick. It was based on the 1978 play of the same name by Wallace Shawn, who also wrote the script with Cairns, and premiered at the Sundance Film Festival on January 19, 2004. Although the film was well received and starred many major motion picture stars, it failed to receive distribution and remained obscure, until it was released on DVD in March 2009. The music was done by Mark Degli Antoni, of the band Soul Coughing.