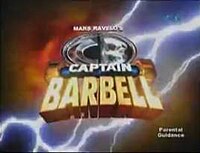 Captain Barbell (International title: Captain Barbell: The Return) is a 2011 Philippine television drama action fantasy series broadcast by GMA Network. The series is based on a Philippine fictional superhero of the same title by Mars Ravelo. Directed by Dominic Zapata, it stars Richard Gutierrez in the title role. It premiered on March 28, 2011 on the network's Telebabad line up replacing Machete. The series concluded on July 29, 2011 with a total of 88 episodes. It was replaced by Time of My Life in its timeslot.