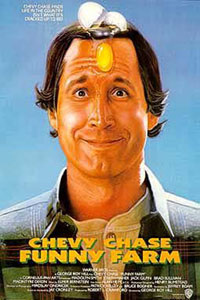 Funny Farm is a 1988 American comedy film starring Chevy Chase and Madolyn Smith. The film was adapted from a 1985 comedic novel of the same name by Jay Cronley. The movie was filmed on location in Vermont, mostly in Townshend, Vermont. It was the final film directed by George Roy Hill.

Andy Farmer (Chase) is a New York City sports writer who moves with his wife, Elizabeth (Smith) to the seemingly charming town of Redbud, Vermont, so he can write a novel. They do not get along well with the residents, and other quirks arise such as being given exorbitant funeral bills for a long-dead man buried on their land years before they acquired the house. Marital troubles soon arise from the quirkiness of Redbud as well as the fact that Elizabeth was critical of Andy's manuscript, while having her own manuscripts for children's books published. They soon decide to divorce and sell their home. To expedite the sale, the Farmers offer the town's residents a $15,000 donation to Redbud, and $50 cash each if they help make a good impression on their prospective home buyers. To that end, the citizens remake Redbud into a perfect Norman Rockwell-style town. Their charade dazzles a pair of prospective buyers, who make the Farmers an offer on the house; however, Andy declines to sell, realizing that he genuinely enjoys small-town living. He and Elizabeth decide to stay together in Redbud, much to the chagrin of the locals, who are now angry that they lost their promised money. Though the mayor does not hold the Farmers liable for the $15,000, as the sale of their house did not occur, Andy decides to pay everyone in Redbud their $50, which helps improve his standing among the townspeople. The film ends with Andy taking a job as a sports writer for the Redbud newspaper, and Elizabeth, now pregnant with their first child, having written multiple children's stories.