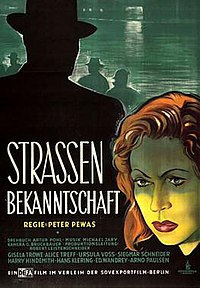 Street Acquaintances is a 1948 German drama film directed by Peter Pewas and starring Gisela Trowe, Alice Treff and Ursula Voß. It was made by the Communist-controlled DEFA studios in the Soviet Zone of Germany Released in both the future West and East Germany it was a popular hit and sold 6,469,626 tickets. While it can be regarded as using a style that resembled the Italian neorealist films of the era, it has also been suggested that it returns to the more traditional style of the Weimar era. It portrays the dangers of spreading venereal disease.