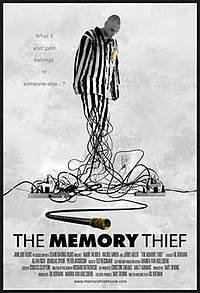 The Memory Thief is an American independent DV drama film from 2007. It was directed by Gil Kofman, and features Mark Webber and Rachel Miner in the leading roles. The film chronicles the experiences of a young man who becomes involved in documenting the experiences of survivors of the Holocaust, as his commitment turns into obsession and madness. Critics were generally favourable of the movie, which was Kofman's debut as a feature director.

Lukas (Mark Webber) is a young man who works as a tollbooth operator. He does not have much of a social life and spends much of his free time visiting his catatonic mother in the hospital. One day, one of the tollbooth customers tosses him a copy of Hitler's Mein Kampf, and Lukas reads it, prompting a Holocaust survivor (Allan Rich) to berate Lukas as he drives through Lukas's booth. The next day the old man gives him a videotape containing his testimony from the concentration camps. Watching the tape, Lukas becomes captivated, not less so when he spots the old man's obituary in the newspaper, and decides to attend the funeral. He is confronted by Mira (Rachel Miner), a young medical student, for attending a funeral without knowing the deceased. They argue. Lukas shows her the witness tape.