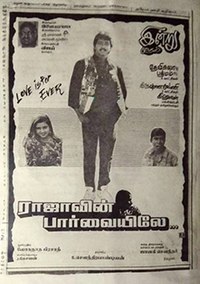 Rajavin Parvaiyile is a 1995 Indian Tamil-language romantic drama film, directed by Janaki Soundar, starring Vijay, Indraja and Ajith Kumar. This was the only film to feature Vijay and Ajith Kumar together. The film, which featured music composed by Ilaiyaraaja, was released in August 1995.

Raja (Vijay) is the son of a poor family, and his only aim in life is to study to get a good job. Meanwhile, Gowri (Indraja), the daughter of the richest man of the village, falls in love with Raja, but he keeps shunning her and getting away from her. She decides to know the reason for his behaviour. Raja narrates a flashback story of his friend Chandru's (Ajith Kumar) unsuccessful love story with Shanthi (Gayathri), and ended up committing suicide after his lover's marriage, so he hates love. Raja later falls in love with Gowri; meanwhile issues of class arise in the village, but finally Raja and Gowri overcome all the issues and unite.