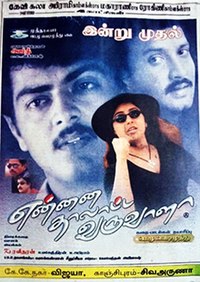 Ennai Thalatta Varuvala is 2003 Indian Tamil-language directed by K. S. Ravindran and produced by P. M. Vedimuthu, who also wrote the story. The film features Vignesh and Reshma in the lead roles, with Ajith in cameo appearance. The film's title is from a song in the film Kadhalukku Mariyadhai (1997).

The film centers around Vennila's (Reshma) connections with the three men in her life. Satheesh (Ajith) wins a college competition and becomes the object of Vennila's ire. In a fit of pique, Vennila feigns love to him, gets him to marry her, and then ditches him on the wedding night. The whole affair leaves Satheesh in a state of shock, and he is later hospitalized and gets into a deep coma. Santhosh (Vignesh) is a new entrant to the college. He chooses Vennila for his games of one-upmanship, leaving her puzzled as to his motive. Amar (Amar Siddique) is Vennila's fiancé from abroad. She later realizes that he is a psychopath – an interesting scenario which had the potential to turn into a good suspense thriller. The script goes for a nosedive after Vennila finds that she is pregnant, and is shocked since she has not had a physical relationship with any of the men. Soon, she realizes that it was the past catching up with her, and it was a planned vendetta by Satheesh's dear ones.