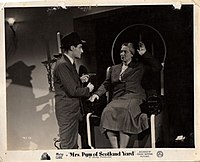 Mrs. Pym of Scotland Yard is a 1939 British comedy-drama film based on the Mrs Pym novels by Nigel Morland. Written by Morland, the film was produced in London at Highbury Studios and was directed by Fred Elles. The film provided actress Mary Clare with her only title role. It was also the debut film role for Nigel Patrick. Filming took place in July 1939 with the film released in January 1940.