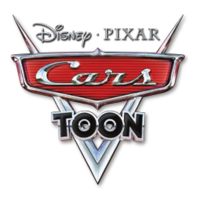 Cars Toons is a television series of American computer-animated short films produced by Pixar. It features the main characters Lightning McQueen and Mater from Pixar's Cars franchise non-canonically on the original plot. The amazing automobiles from Disney/Pixar's Cars franchise are featured in these special short adventures. Larry the Cable Guy reprises his role as Mater while Keith Ferguson replaces Owen Wilson as the voice of Lightning McQueen (until The Radiator Springs 500 ½, when Wilson reprises his role).

All Cars Toons in Mater's Tall Tales follow the same tall tale formula: the episode opens with Mater popping out of his garage and declaring, "If I'm lyin', I'm cryin'!" (or a variation thereof as seen on the home media and television releases).