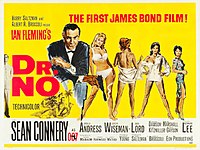 Dr. No is a 1962 spy film directed by Terence Young. It is based on the 1958 novel of the same name by Ian Fleming. Starring Sean Connery, Ursula Andress, Joseph Wiseman, and Jack Lord, it is the first film in the James Bond series, and was adapted by Richard Maibaum, Johanna Harwood, and Berkely Mather. The film was produced by Harry Saltzman and Albert R. Broccoli, a partnership that continued until 1975.

John Strangways, the Station Chief of MI6 in Jamaica, is murdered by a trio of assassins, along with his secretary, before his home is ransacked. When news of Strangways' disappearance reaches M, the head of MI6, he assigns agent James Bond to investigate the matter, and determine if it is related to Strangways' cooperation with the CIA on a case involving the disruption of rocket launches from Cape Canaveral by radio jamming. When Bond arrives in Jamaica, he is accosted by a man claiming to be a chauffeur sent to collect him, but is really an enemy agent sent to kill him. Before Bond can interrogate him, the agent kills himself with a cyanide capsule. After visiting Strangways' house, Bond confronts a boatman that Strangways was acquainted with. The boatman, named Quarrel, reveals that he is aiding the CIA and introduces Bond to their agent Felix Leiter, who is also investigating Strangways' disappearance.