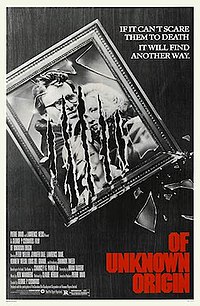 Of Unknown Origin is a 1983 Canadian-American horror film directed by George P. Cosmatos and starring Peter Weller. It was written by Brian Taggert and based on the novel The Visitor by Chauncey G. Parker III. It was filmed on location in Montreal, Quebec but set in New York City. The film won two awards at the Paris Film Festival.